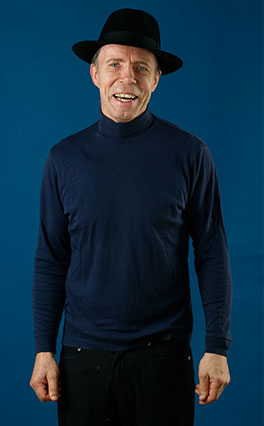 Genius & Trailblazer
Dr. Gunther von Hagens is a physician, scientist, inventor and a forward thinker who has made the anatomy of the human body accessible to a wide audience in an unprecedented way.

“Gunther von Hagens pushes the envelope – he is an intellectual daredevil and adventurer, the type humankind occasionally needs. Any society, however, would fall apart if all of its citizens were such types. At the same time, a society without any boundary-pushers is just as impossible, they are essential for the development of society. If no one risks failure, nothing new is attempted and there would be no development, only stagnation and decay. Progress is possible only if everything that is common is occasionally challenged. This sometimes requires breaking taboos to allow for creativity.”

“The anatomist alone is assigned a specific role-he is forced in his daily work to reject the taboos and convictions that people have about death and the dead. I myself am not controversial, but my exhibitions are, because I am asking viewers to transcend their fundamental beliefs and convictions about our joint and inescapable fate.

I hope for the exhibitions to be places of enlightenment and contemplation, even of philosophical and religious self-recognition, and open to interpretation regardless of the background and philosophy of the viewer.” 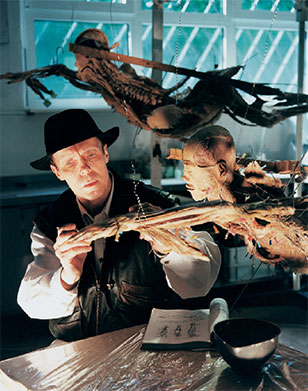 The most important milestones at a glance

At the age of 20, he began his studies in medicine at the University of Jena in the German Democratic Republic (GDR), East Germany.

In January 1969, he became a political prisoner in the GDR, however he was released when the Federal Republic of Germany, “West Germany” purchased his freedom.

After his liberation he continued his studies in Lübeck, where he passed his final exams in 1973, and, a year later received his license to practice medicine.

Gunther von Hagens accepted a job offer by Heidelberg University, where he obtained his doctoral degree from the Department of Anesthesia and Emergency Medicine.

Lecturer and scientific assistant at the Anatomical Institute of the University of Heidelberg.

He transferred to the Institute of Anatomy and Pathology, and shortly thereafter invented the technique of plastination.

Founding of BIODUR® Products, a company specialized in plastics and plastination equipment.

Registration and granting of patents in different countries. In the 80’s he began the first body donation program for plastination, nowadays more than 18.000 donors are registered.

He founded the private Institute for Plastination, which opened up new dimensions for the further development of his invention.

Termination of the activity at the University of Heidelberg.

He established the Gubener Plastinate GmbH, a plastination laboratory in Guben, Germany. It is considered the world’s leading plastination research, development and preparation facility.

Dr. von Hagens decided to dedicate an entire exhibition to animals and created the ANIMAL INSIDE OUT exhibition, which was shown in Germany for the first time.

Public announcement of his Parkinson’s disease.

Awarded with the Health Media Award for the best science communication.

The Association of Science Technology Centers (ASTC), representing 650 science centers and museums in nearly 50 countries, honored him with a lifetime achievement award for outstanding contribution to the public understanding of science.

To this day, Gunther von Hagens is involved in a large number of projects, in particular the further development and perfection of plastination, special plastics and process engineering. 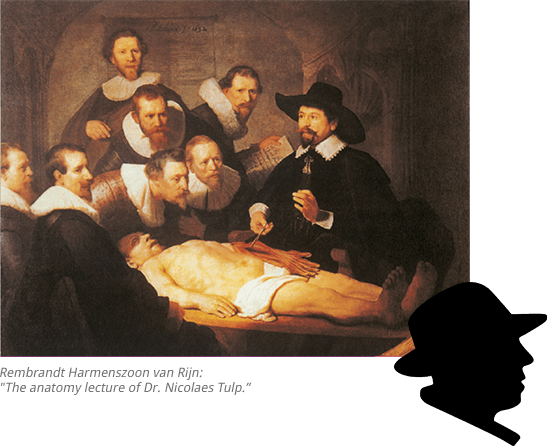 Rembrandt’s painting of anatomist, Dr. Nicolaes Tulp, illustrates the custom of anatomy artists of the Renaissance wearing a hat, which they would keep on, even during autopsies. In doing so, they demonstrated their independence from the social norms of their time.

Many associate Gunther von Hagens with his black hat, but his hat is not intended to be a hallmark, it symbolizes his understanding and appreciation for democracy and individualism. He believes that the strength of Western democracy lies within the promotion of individualism, based on the motto, “live and let live.”

The curriculum vitae of Gunther von Hagens shows the profile of a scientist who was marked by extraordinary events, and whose outstanding qualities include courage, perseverance and a certain defiance. 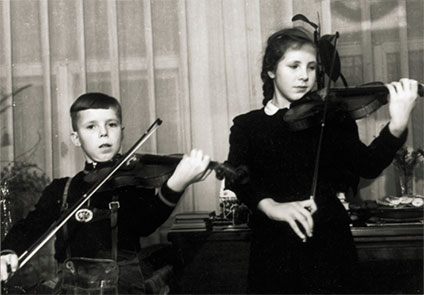 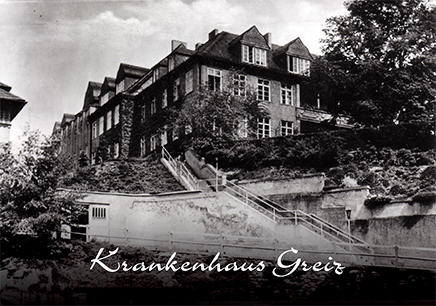 At age 6, von Hagens nearly died and was in intensive care for many months. His daily encounters with doctors and nurses left an indelible impression on him, and ignited his desire to become a physician.

During medical school, his unorthodox methods and flamboyant personality were remarkable enough to be noted on academic reports.

"Gunther Liebchen is a personality who does not approach tasks systematically. This characteristic and his imaginativeness, that sometimes let him forget about reality, occasionally led to the development of very willful and unusual ways of working," reports stated. 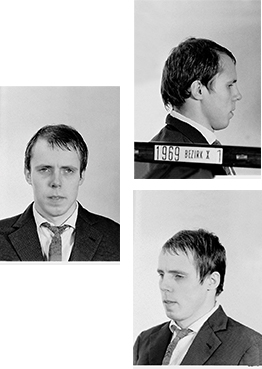 While at university, von Hagens began to question communism and socialism. When he attempted to escape East Germany across the Czech border to Austria into freedom, he failed and was detained by authorities.

Today, Gunther von Hagens sees his ‘lost years’ in captivity as meaningful, “The freedom that was taken away from me, strengthened my perseverance. Everything I learned in prison was of great use to me in my later life as a doctor and inventor,” he recalls.

In 1970 West Germany purchased his freedom. Seven years later, at the beginning of his 20 year career at the University of Heidelberg, he invented Plastination, his groundbreaking procedure for the preservation of anatomical specimens using reactive plastics.
Gunther von Hagens patented the process and since then has been dedicated full-time in further development of his plastination technology. In 1992, he married Dr. Angelina Whalley. The following year the pair founded the Institute for Plastination in Heidelberg, which opened up new possibilities for the work of the two physicians. 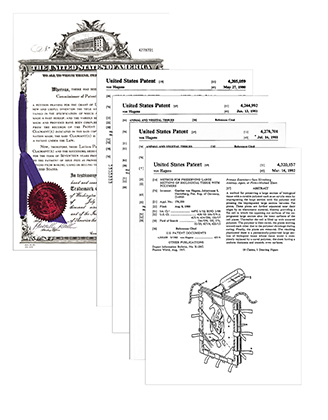 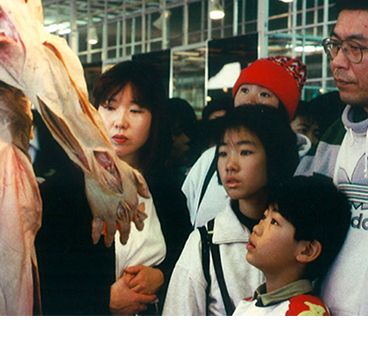 In 1995 the couple was invited by the Japanese Anatomical Society to participate in an exhibition at the National Science Museum in Tokyo, Japan.
The exhibition was unexpectedly a great success. At the end of 1997, Gunther von Hagens and Angelina Whalley, the curator of the exhibitions, presented BODY WORLDS for the first time in Mannheim.
With their exhibitions, the two scientists not only provide health education, their exhibitions have revolutionized the world of museums and demonstrably changed the visitor's view of their own body.

In 2006 von Hagens founded the Gubener Plastinate GmbH in Brandenburg, Germany. For the first time he opens his laboratory to a broad audience.
The campus also houses the PLASTINARIUM, which promotes public anatomy by granting access for all visitors to observe the preparation of permanently preserved, anatomical specimens. 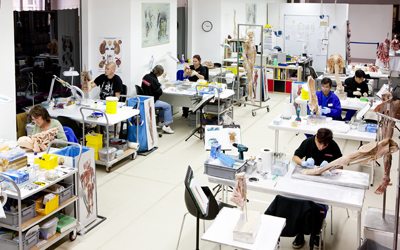 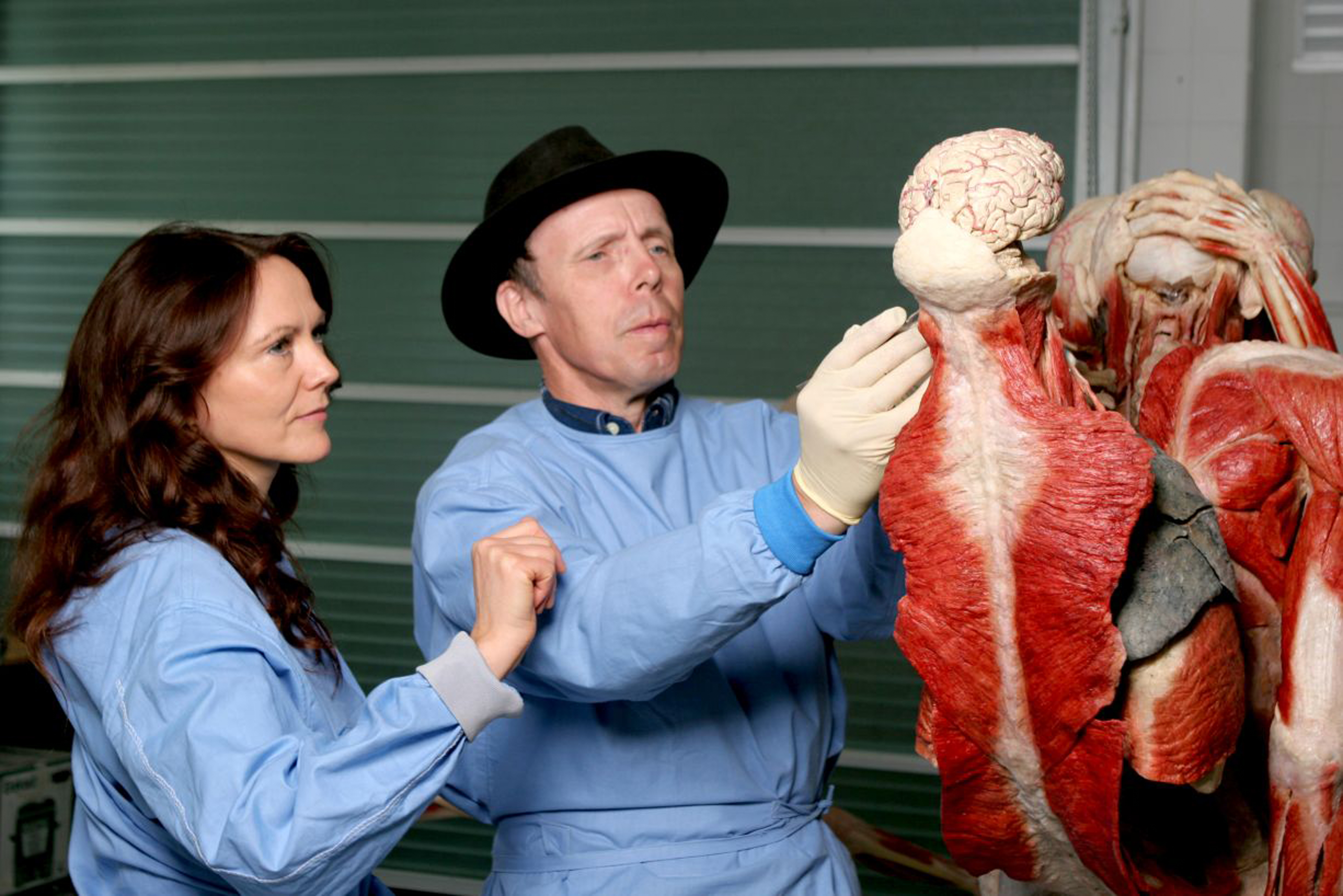 Today, more than ten BODY WORLDS exhibitions of humans and animals are touring around the world, some of which are permanent exhibitions or museums, in Berlin, Heidelberg, Amsterdam and London.
In an effort to test the limits of a life in freedom, Dr. von Hagens made an incredible effort to democratize anatomy and to represent his view worldwide.

At the end of 2010, Dr. Gunther von Hagens publicly announced his Parkinson disease. He is also an anatomist and enlightener regarding his illness and treatment: In some exhibitions, the X-ray image shows his head with brain pacemaker and the implanted electrodes.
In recent years, his public appearances are rare and he has withdrawn from the active business and transferred the management of Gubener Plastinate GmbH to his son Rurik von Hagens. However, his zeal for work remains unbroken until today. He is always concerned with one thing above all: science. "I live to work. Hardly anything else can fascinate me or mean so much to me". 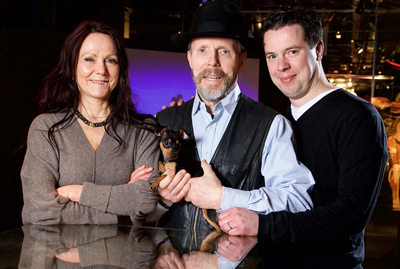 "The older I get, the more I realize that death is normal and that it is life that is exceptional.”

“I hope BODY WORLDS will encourage people to strive to live with inspiration every day throughout their lives."

“I strongly believe in the democratization of anatomy, that science should be available to the general public instead of being locked up in the ivory tower.”

“Knowledge about the human body should not remain the secret of a privileged few, it should be freely available to everyone.”