ON TOUR:
TAKE AN EYE-OPENING SAFARI

THROUGH THE ANIMAL KINGDOM

Dr. Gunther von Hagens’ unique and spectacular exhibition BODY WORLDS: ANIMAL INSIDE OUT is an unforgettable trip under nature’s skin, fur and feathers. It offers visitors an unprecedented view into the interior of the body of spectacular specimens— from a tiny mouse to a 16 ft. (5 m) tall giraffe. ANIMAL INSIDE OUT explores the most amazing aspects of animal physiology, and explains how animals move, breathe, connect, eat and reproduce. 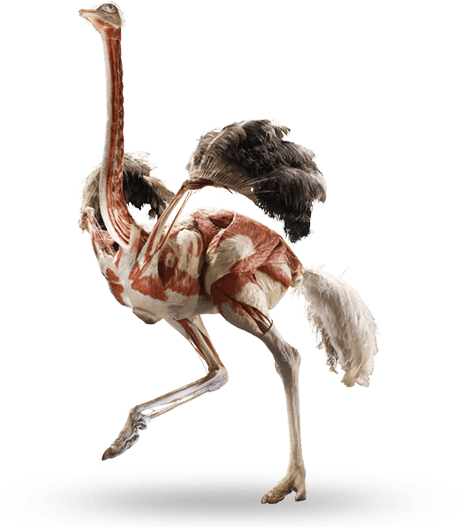 “This exhibition gives guests a fascinating up-close view of the inner workings of complex biological systems they may know very little about. The animal specimens are stunning: dramatic and beautiful at the same time. This is an unforgettable museum experience that will leave guests with a better understanding of and appreciation for the magnificent creatures on our planet.”

"BODY WORLDS: ANIMAL INSIDE OUT is a fascinating approach to the study of animal anatomy."

“Discovering how animals adapt to certain living conditions is mind-blowing.”

Explore the intricate biology, zoology, and physiology of the world’s most spectacular creatures, large and small, in this fascinating exhibition by BODY WORLDS creator, anatomist, Dr. Gunther von Hagens and curator Dr. Angelina Whalley. Whether wild, exotic, domestic, or familiar, ANIMAL INSIDE OUT offers a glimpse into the biology and diversity on our.

BODY WORLDS: ANIMAL INSIDE OUT is designed for visitors of all ages to better understand the anatomy of animals. A visit will uncover unique animal qualities like how reindeer can navigate on icy ground, what a giraffe’s tongue is capable of, and why ostrich are so fast. Visitors will develop a deeper sense of appreciation for our planet. Amazing differences between humans and animals are uncovered, while also learning just how much we have in common!

We are all Connected

A wake-up call for each of us!

The exhibition aims to draw our attention to the vulnerability of the animal kingdom and instills a greater appreciation for endangered species. The more we know about our co-habitants on planet Earth, and how similar they are to us, the more we can learn treat animals with utmost care and respect.

ANIMAL INSIDE OUT was conceived when Dr. von Hagens’ Institute for Plastination was first donated a gorilla from a German zoo, followed by a giraffe and later an elephant. More animals followed, and the collection grew.

There are now two animal exhibitions touring Europe and North America. They are considered the pinnacle of Dr. von Hagens’ work as anatomist, both because they showcase a huge step forward in the development of the preservation technique, and because of the large scale and sheer mass of the specimens.

It took Dr. von Hagens and his team thousands of hours of labor and over 10 years to complete the exhibitions. The first collection of plastinated animals was displayed in 2010. 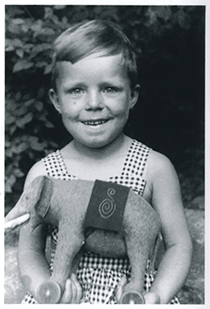 As a child, I was enthralled by the small animals I encountered in the woods. The first specimens I dissected were beetles, frogs, and other small animal corpses that my friend and I found in the woods. These deaths shaped my thoughts on mortality, preparing me psychologically for my career as an anatomist.

Nowadays, in an accelerated technological age, when our environments are fashioned from steel and concrete, being in close proximity to animals—both domestic and wild—return us to authenticity. Outside of the rainforests and flora, they and we are the last remaining pieces of nature. They are our co-habitants on this spinning blue globe. ANIMAL INSIDE OUT, is both a celebration and an homage to animals both familiar and rare.

From the Amazon to the Arctic and the Congo Basin to the Coral Triangle, animal populations are disappearing at an alarming rate and are facing the risk of becoming extinct. As of today, approximately 1,300 species are classified as “endangered” or “threatened”.

Among the most critically endangered are tigers, rhinos, gorillas and marine turtles. Humans are largely responsible. Construction of homes, buildings, and strain on natural resources for food, clothing, fuel and all the stuff we consume; and the waste we produce – contribute to the main causes of species loss:

When a species is listed as endangered or threatened, it is not a death sentence. Conservation can be helped with everyday choices. Urging government officials to support efforts to reduce carbon pollution and to take a strong stand to protect endangered animals and their habitats is essential. Choosing responsibly farmed seafood and paper products are other ways to help.

Dr. Gunther von Hagens and Dr. Angelina Whalley, creators of ANIMAL INSIDE OUT, are honored to be able to conserve and present the biological wonders of nature featured in ANIMAL INSIDE OUT for anatomical study. They hope that this exhibition will show visitors the similarities between human and animals, leading to a greater respect and appreciation for all animals. 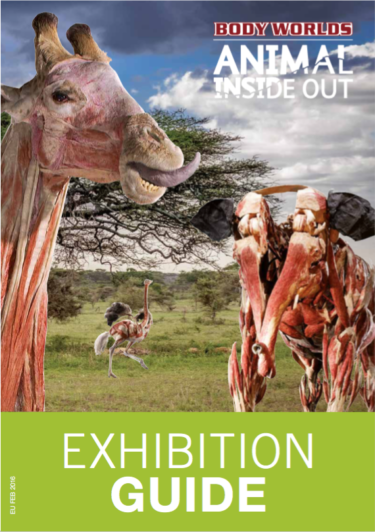 Exhibition Guide
ANIMAL INSIDE OUT

This 27-page guide provides comprehensive background knowledge and supports teachers and parents during the preparation and follow-up of their exhibition visit. 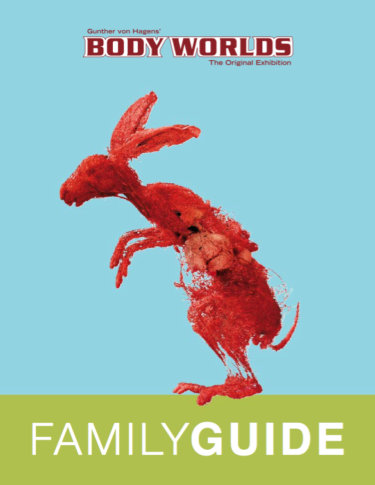 Family Guide
ANIMAL INSIDE OUT

For parents and kids. This guide will help to teach more about BODY WORLDS and the human body. 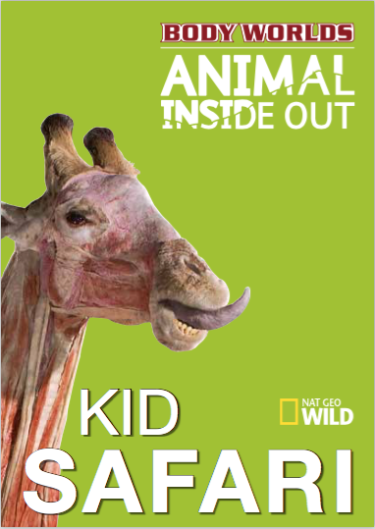 The Kid-Safari will help children to learn interesting facts about the animals in the exhibition in a playful way.

What is the purpose of the animal exhibition?

The purpose of BODY WORLDS: ANIMAL INSIDE is to inspire a deeper appreciation and respect for the animal world. The exhibition will allow visitors the unique opportunity to explore the intricate biology and physiology of some of the world’s most spectacular creatures, using the amazing science of Plastination.
A visit to ANIMAL INSIDE OUT will go beyond what is seen in zoos, aquariums and animal parks. Visitors will be better able to understand the inner workings of animals and compare them to human anatomy, resulting in a new understanding of the amazing beauty of both animals and humans.

Where did the animals on display come from?

ANIMAL INSIDE OUT is made possible with cooperation between various university veterinary programs, zoos and animal groups. No animal was harmed or killed for this exhibition.

Among the animals in the exhibition are human specimens, originating from the Institute for Plastination's body donation program. The generosity of these individual donors has made it possible to present human specimens in this and all of the BODY WORLDS exhibitions.

Invented by scientist and anatomist Dr. Gunther von Hagens in 1977, Plastination is the groundbreaking method of halting decomposition to preserve anatomical specimens for scientific and medical education. The process involves extracting all bodily fluids and soluble fat from specimens, replacing them through vacuum-forced impregnation with reactive resins and elastomers, and then curing them with light, heat or certain gases, which give the specimens rigidity and permanence.

Is this exhibition appropriate for children?

ANIMAL INSIDE OUT was designed for visitors of all ages to better understand animal anatomy. Children and adults will be delighted when they discover curiosities about animals – like the reason why reindeers can navigate icy ground, what the giraffe's tongue is capable of, and why bulls have such strength. This exhibition provides an opportunity to see and learn about animals like never before.

What educational materials are provided?

Teachers will wish to prepare both their students and their adult supervisors carefully for their exhibition experience. Educator materials are available for download on the Teacher & Parents site. Please inquire about educator preview opportunities.

Will I be able to touch any of the plastinates?

While you will be able to get very close to the plastinates, as a rule, visitors are not allowed to touch them.

How long will I need to fully appreciate the exhibition?

Average duration of a visit to ANIMAL INSIDE OUT is one hour but guests are welcome to remain in the exhibition as long as they wish, within opening hours.

Where have the animal plastinates been shown before?

ANIMAL INSIDE OUT is made possible through cooperation between various university veterinary programs, zoos, private donations and animal organizations. No animal was harmed or killed for this exhibition.
Among the animals in the exhibition, are human specimens, originating from the Institute for Plastination's body donation program. The generosity of these individual donors has made it possible to present human specimens in this and all of the BODY WORLDS exhibitions.
Dr. Gunther von Hagens and Dr. Angelina Whalley, creators of ANIMAL INSIDE OUT, are honored to be able to conserve and present these biological wonders of nature for anatomical study. They hope that this exhibition will show visitors the similarities between humans and animals, leading to a greater respect and appreciation for all animals.

Can you take photographs or film in the exhibitions?

Professional and commercial photography and filming in the exhibitions is not allowed. Some venues may permit amateur photography with small handheld devices. Please note that photography that may be distracting to other guests may be limited or restricted at any time. Members of the media wishing to photograph or film in the exhibition should contact the local PR office.